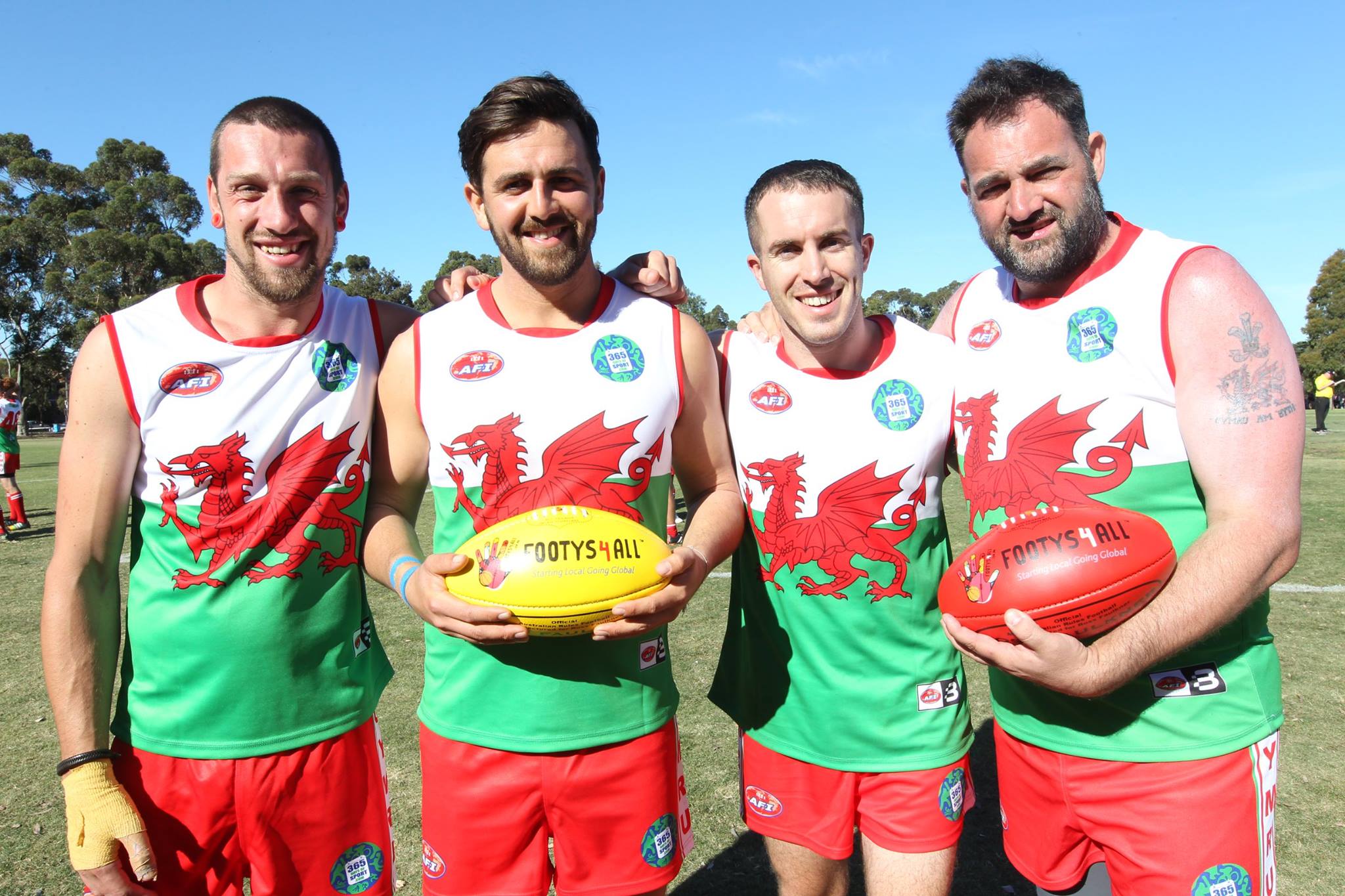 AUSTRALIA & WALES
It is believed that the eastern coast of Australia reminded Captain James Cook of the coast of South Wales (especially the Vale of Glamorgan coast, which he knew), hence the name he gave to it, “New South Wales”.

According to the 2006 Australian census 25,317 Australian residents were born in Wales, while 113,242 claimed Welsh ancestry.

TEAM WALES
The Welsh Dragons are based in Melbourne and have competed in the Harmony Cup, World 9s and Touch Footy World Cup.

If you are of Welsh descent and keen to represent Wales, please join the Team Wales Facebook group. I got involved with AFI in 2014 when I managed to put together a rag-tag bunch of expats to represent Wales in the 2015 World Cup. The opportunity for all those lads to play for Wales was a huge incentive. It brought everyone in that squad together, and I can safely say we all made some friends for life during those 6 months that culminated in us getting on the field.

I’m going to be honest, it was a struggle at times to keep everyone motivated and pushing toward making our goal of fielding a truly National team. In our squad of 25 players, 21 were born in Wales – probably more home-grown players than any other country in that tournament – and that includes Ireland! I’ve achieved a lot in my sporting career, but being a part of that Welsh team that ran on that field against The Netherlands was right up there.
Aussie Rules is a tough sport to get ex-pats playing as a group. You realistically need 25 committed players, the skill set is totally foreign to effectively every other sport and the size of the playing field tends to put a lot of people off playing the game.

This is where Footy 9s becomes a much more attractive proposition. If Aussie Rules really wants to become an international game, there are far too many obstacles standing in its way – the major ones simply being field availability and getting enough players to play.

Rugby 7s is a great blueprint for a small-sided game. It’s truly now a global game and has become one of the most watched sports in the Olympics. Footy 9s has simpler rules, easier scoring and can be played on fields that can be found in nearly every community in the world. The game itself is spectacular and it leaves sports lovers in awe when they happen to come across it either on TV overseas or on a visit to these fine shores!

AFI has simplified the game. It can be played on football, rugby or gridiron fields and there are less moving parts for newcomers to get their heads round. If ever there was a fantastic pathway into playing Australian Rules Football, then Footy 9s is surely the way forward.

I attended the World 9s this year at Box Hill Rugby Club and it was truly phenomenal to see teams, both male and female, being represented from all 4 corners of the globe. It’s not that often you get to hear that Chile just beat Switzerland at Aussie Rules!!! Just by being at the event you could see each countries’ local communities really coming together and getting behind their teams. I am positive that the players that pulled on their National jerseys on that day will feel immense pride and remember it for the rest of their lives. I certainly did!